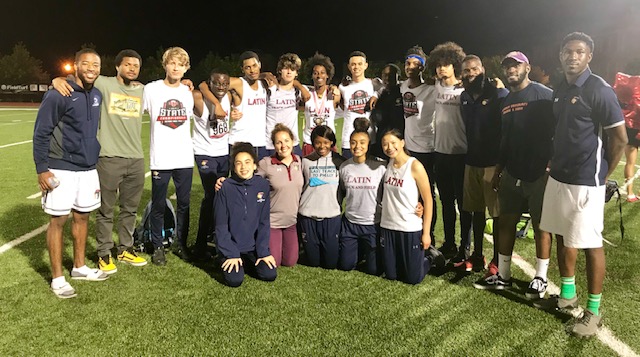 Upper school students on the track team attended the DCSAA Track and Field State Championships last week. The boys’ 4x800m race team of Oliver Spiva, Kaleb Mokonnen, Nick Geist, and Luke Tewalt set a new school record (8:15.73) to become State Champions. Both girls’ and boys’ 4x200m teams, consisting of Cecily Bufkin, Kemari Bolden, Sydney Weaver, Raven Berry on the girls’ side and Immanuel Charles, Arthayuga Briscoe, AJ Burton, and DJ Okuleye on the boys’ side, finished All-State. DJ Okuleye made it to the 100m finals, finishing 6th overall, earning an All-State Honor. In the 3200m the team had two State Champions in Zoe Edelman and Luke Tewalt! Luke broke the meet record, which he set himself last year at the same meet. The team had a lot to be proud of after day one. Edelman also set a record in the 1600m. She will compete at the New Balance School Nationals in the 5000m race in June.  Meanwhile, Tewalt won the triple, crown, the 3200m, 1600m, and 800m races. He is a four-time state champion this season, including the team’s 4x800m first place finish He will run the 3200 at Nationals.