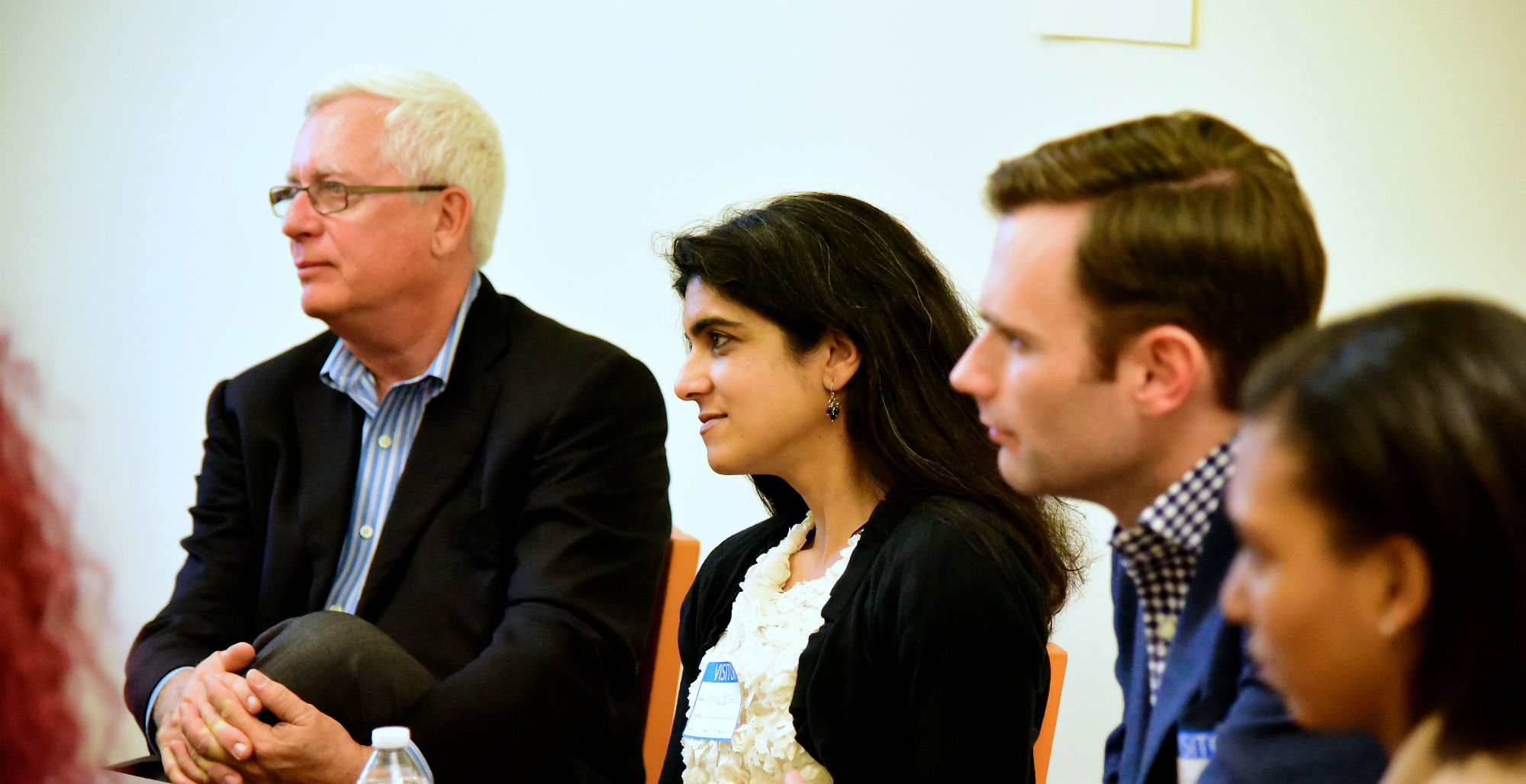 Washington Latin Public Charter School is authorized by and accountable to the District of Columbia Public Charter School Board (DCPCSB). This board evaluates all DC public charter schools for academic results, compliance with applicable local and federal laws, and fiscal management.  We are held accountable to the PCSB for our results and the goals established in our charter agreement. Washington Latin is ranked Tier One (see Our Results for more detail).

Washington Latin Board of Governors

Washington Latin is governed by an all-volunteer board, responsible for oversight of the school’s academic and fiscal well-being. Our Board of Governors is comprised of a maximum 15 members.  The Board currently includes four parents of Latin students, who bring this important perspective to our discussions about the school’s current work and future direction. There are seven Board-led committees, and the full Board meets eight times per year.  If you have questions about the board, please contact Peter Anderson, Head of School, or Chris Wilkinson, Board President.

Christopher Wilkinson is a partner at Orrick, maintaining a broad practice in labor and employment, Equal Pay, health and safety, government relations and administrative law. Chris most recently served as Associate Solicitor for Civil Rights and Labor-Management. In that role, Chris was the senior career civil rights and labor management lawyer for the Department of Labor providing advice on regulatory, policy and enforcement matters for seven DOL agencies including the Department’s Office of Federal Contract Compliance Programs, Civil Rights Center and Office of Labor Management Standards. Chris is an active member of the America Bar Association, having presented on numerous federal contractor compliance, LGBT and compensation discrimination topics at the ABA Conference on Equal Employment Law.

Ragini Dalal has worked in international development for over 20 years, from grassroots non-profit work to policy and corporate settings. She has lived and worked in Africa, Russia, and the Middle East. Ragini is currently a lead strategy and operations officer at the World Bank and is responsible for monitoring global investments in projects which provide access to water and sanitation to the developing world. Other positions she has held at the World Bank include deputy to the country director in Kenya overseeing an office of over 100 staff and a $2 billion portfolio of investments, and as an advisor to the World Bank’s Board of Executive Directors. Prior to the World Bank, Ragini worked as an advisor at the Harvard Institute for International Development working on the privatization program in Russia and with various DC-based NGOs. Ragini’s two children have both attended Latin. She has been active in DC public schools and the charter school movement since 2001 as a parent and serving in a variety of voluntary positions, and is a member of the Charter Board Partners network. Ragini holds a Bachelor of Arts from Colgate University and a Master of International Affairs/Economic Development from Columbia University. She joined the board in July 2015.

Tim Morgan has broad experience in matters of risk management and governance, quality, and finance gained from over 35 years as auditor, advisor and Board leader. He retired as a partner with PricewaterhouseCoopers LLP in 2014, having served as the firm’s Public Sector Risk and Quality Leader and as an auditor and advisor to federal agencies and diverse public and private companies. PwC’s Public Sector Practice won the Malcolm Baldrige National Quality Award in 2014. Tim served for eight years on the Board of Trustees of the American Kidney Fund (kidneyfund.org) and was Board Chair and Chair of Audit Committee. Tim is a graduate of the University of Virginia’s McIntire School of Commerce and is a Certified Public Accountant. Tim joined the board in September 2015.

Laurie Ballenger is General Counsel to The Donohoe Companies, Inc., one of the DC region’s largest real estate companies, and is involved in all aspects of the company’s real estate and operating businesses. She has over 20 years of experience in commercial real estate law in both private practice and as a corporate executive. Prior to joining Donohoe, she practiced commercial real estate law with the firms of Bregman, Berbert, Schwartz & Gilday, and Pillsbury Winthrop Shaw Pittman, and also served for nine years as General Counsel to The Artery Capital Group, LLC, a privately-held commercial real estate company. Laurie and her husband have five children, four of whom are students at Washington Latin. She joined the board in 2018.

Barry Caldwell has had a long career in business as a C-Suite Public Affairs & Communications, Human Resources, and Legal executive. He recently stepped down as Waste Management’s Senior Vice President for Corporate Affairs and Chief People Officer, responsible for leading the company’s human resources, state and federal policy, corporate communications and community relations, and aviation. Prior to joining WM, Barry was the Vice President for Government Relations for CIGNA Corporation. Previously, he was Vice President of Federal Affairs for the Pharmaceutical Research and Manufacturers of America and Chief of Staff to US Senator Arlen Specter. Barry began his professional career practicing law with two Washington, DC law firms. He also benefits from significant board service on several nonprofit organizations and trade groups.  Barry holds an AB from Dartmouth College and a JD from Georgetown University Law Center, and is the father of three adult children. He joined the board in 2018.

Christina Erland Culver is a leader in the education technology industry, and advocacy expert for non-profits advancing next generation learning. In 2009, she founded C/H Global Strategies, LLC to provide strategic counsel to companies and non-profits seeking to navigate complex federal and state education policy to solve K-12 education’s most pressing needs. Christina gained her expertise working in senior positions at the U.S. Department of Education, including Acting Assistant Secretary and Deputy Assistant Secretary of Intergovernmental and Interagency Affairs from 2003-2006 where she managed the relationship between federal and state governments regarding compliance issues surrounding the Elementary and Secondary Education Act. She also served at Education under Secretary Lamar Alexander in the early 1990s and at the White House for President George H.W. Bush in Presidential Personnel. In addition to government service, from 1998-2003 she was vice president of public affairs for Children First America, a national non-profit in support of school choice public policy. She serves on the Board of Directors for Living Classrooms National Capital Region. In 2009 Christina co-authored the book, Virtual Schooling: a Guide to Optimizing Your Child’s Education. Christina is a recent graduate of the U.S. Naval War College with a Masters degree in National Security and Strategic Studies, and has a B.A. in Political Science from the University of Kansas. She joined the board in October 2013.

Alyse Graham is a teacher and lawyer with broad public sector experience.   Alyse graduated from Yale University and received her law degree from Stanford Law School.  She served as a prosecutor for the U.S. Department of Justice and the U.S. Attorney’s Office for the District of Columbia, and she has taught criminal law and criminal procedure at George Mason University Law School and American University School of Law.  Five years ago, Alyse joined Teach for America and became a teacher at Everett Middle School in San Francisco. She taught science and social studies in both Spanish and English as part of the school’s dual immersion curriculum, and served on the school’s Parent Engagement Committee.  Alyse has also served on the Superintendent’s Committee on Equity for the San Mateo Foster City School District and consulted to Amplify, a national curriculum developer, on a new NGSS-aligned K-8 science curriculum. Alyse is a native Washingtonian who lives here with her husband and three children.

Ann Elizabeth (A.E.) Lovett works as a US Foundations Consultant for Fauna & Flora International (FFI), the world’s oldest wildlife conservation organization, which is based in Cambridge, UK. Prior to joining FFI, A.E. spent over 20 years in legislative affairs and communications. She worked in legislative affairs at Alston & Bird, the Investment Company Institute, and the Environmental Technology Council and edited publications from The Electronic Banking Law and Commerce Report to The China Business Review. Before moving to Washington she worked in Hong Kong and Beijing as a business consultant. She has coached ice hockey for over 25 years, and played for even longer. She and her husband Steve live in Crestwood and are founding parents at Latin – their eldest was in the school’s first fifth grade class, and their tallest graduated from Latin in 2018.  A.E is a graduate of Dartmouth College. She joined the board in December 2013.

Patrick Mara is Executive Director of the DC Republican Party. Prior to his position at the DC GOP, he was elected to the DC State Board of Education (SBOE) in 2010 and served a four year term representing Ward 1. During this period, Patrick also focused on small business development and related consulting. He previously worked on Capitol Hill for the late Senator John H. Chafee (R-RI); at the U.S. Department of Energy as a contractor; and later lobbied both the Legislative and Executive branches of the Federal government for seven years. Over the last decade, Patrick served on the Boards of numerous local non-profits devoted to supporting the educational needs of District children and long-term tutored and mentored a number of DC Public School students. Before earning an entrepreneurship-focused MBA from Babson College, Patrick graduated from Marist College where he is a past President of the Alumni Executive Board and past Board of Trustees alumni representative. He and his wife live in the Columbia Heights neighborhood of Ward 1 with their two sons. Patrick joined the board in March 2015.

Caitlin McGurn is a partner with Guidehouse in the Financial Services practice. Caitlin graduated from the University of Notre Dame in 2003 with a Bachelor’s degree in accountancy and from Boston College in 2004 with a Master of Science in accountancy. She began her career with PwC in Boston and spent the early part of her career performing financial statement audits of commercial entities. Caitlin moved to DC in 2005 and focused on providing risk, governance, internal controls, and financial reporting advisory services to public sector entities. Caitlin remained with PwC until May 2018 when PwC Public Sector was sold and became Guidehouse. Caitlin’s clients include the US Department of Education, among other entities in the public sector and higher education finance. Caitlin is a Certified Public Accountant (CPA) in VA and DC, a Certified Information Systems Auditor, and a Project Management Professional, and is the mother of two children.

As president of Cornell, Hunter provided strong support for continuing to increase student diversity and for Cornell’s need-blind admission policy, which was made permanent during his tenure. He also renewed Cornell’s emphasis on the importance of undergraduate teaching, setting an example by teaching an undergraduate course in the Department of Classics during the last two years of his presidency. Hunter set strategic scientific priorities for Cornell, resulting in, among other things, the Cornell Genomics Initiative and New Life Sciences Initiative. Hunter also reorganized the biological sciences on the Ithaca campus and set in motion the plans for constructing a pioneering facility for life science technologies. At the same time, he provided additional support for the programs in the humanities and social sciences at Cornell, recognizing their critical significance for the future of human societies in a rapidly changing scientific and technological environment.

A national spokesperson for higher education, Hunter has served as chair of both the Association of American Universities and the Ivy Council of Presidents. He is a member of the American Academy of Arts and Sciences, and he serves on the boards of the American School of Classical Studies in Athens, Haverford College, and the National Academy Foundation. Born in Norfolk, Virginia, Hunter graduated from Haverford College with honors in Classics and received his Ph.D. degree, also in Classics, from Princeton University. His scholarly publications include a book, The Structure of Thucydides’ History (Princeton University Press, 1981). Hunter joined the board in September 2015.