Junior Luca Camponovo’s documentary “BeBop’s Blare: How Modern Jazz Communicated the Protest of Black Americans in the Middle of the 20th Century” was chosen by the National Museum of African American History and Culture to participate in the 2021 documentary showcase presented by National History Day. Luca is also a member of the school Jazz Band. He developed his documentary through an elective course called “Real World History” through the Center for Inspired Teaching.

Discs in the Air

The Latin Lions MS Ultimate Frisbee Team went to Fort Stevens Rec Center to play DCI last Thursday. With such a large Latin team, there were two Latin squads (Alpha and Omega) and Washington Latin also lent DCI additional support in the form of two players. In the mini games, Latin Alpha went 4-2 (both losses to Latin Omega) and Latin Omega went 3-2. DCI only managed one win against the Latin Omega squad. Both Latin squads included every team member in the game and how every Latin player made tremendous contributions to the team effort. The team is coached by fifth grade Latin teacher Mr. Starnes and Student Support Services teacher Mr. O’Brien.

Latin’s A-Team baseball defeated BASIS 12-2 last week in a thrilling game. Seventh grader Tate Meier led the way with a 3 RBI day. Eighth grader August Heim picked up his 2nd win, working three innings and striking out 6. Latin moves to 3-0 on the season and will play DCI next Friday at 4:00 at the RFK Sportsplex. A Latin win will bring home the PCSAA Baseball championship for the first time since 2015. The team is coached by sixth grade history teacher Mr. Staten and middle school dean Mr. Coleman. 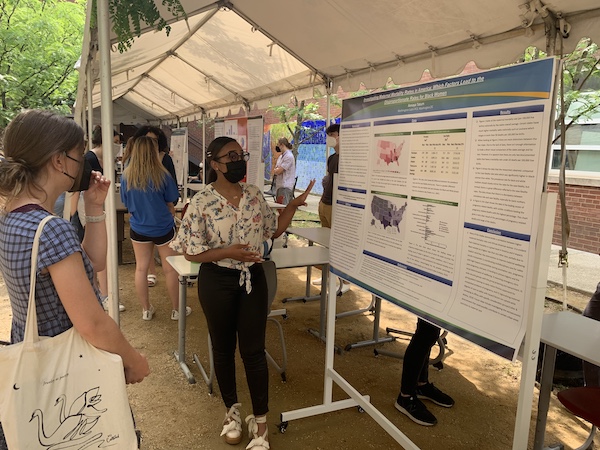 Ms. Jost’s science research methods held its annual Poster Symposium on Wednesday at 10:30 in the courtyard. Students presented their year-long research findings. The class allows students to define and plan and complete an original research project on scientific and medical issues. 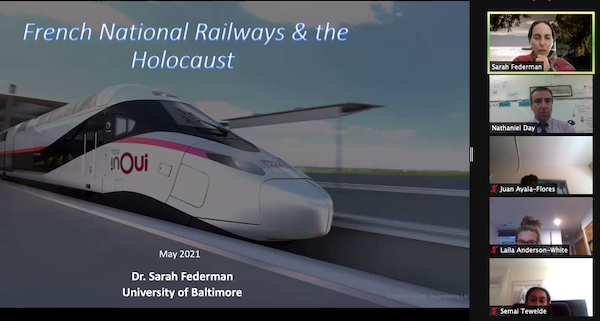 Sarah Federman, a professor of conflict resolution at the University of Baltimore spoke to Mr. Day’s tenth grade English class about her research for her book The Last Train to Auschwitz, which published in April. He research followed the complicity of the French Metro, the SNCF, in its role in deporting Jews to Auschwitz  in Nazi-controlled France. Doctor Federman helped students connections between the SNCF’s complicated relationship to the Holocaust and their own interactions with companies who have complicated relationships to similarly oppressive and exploitative practices today. Students considered the various roles corporations have had in oppression and genocide past and present, and how they might respond to them as consumers, and also asked Dr. Federman about her own career path, from college to corporate work to an MA, a PhD, and international conflict resolution consulting.